UK - nothing to do with Islam?

1 car, 2 cars, 3 cars ... who knows how many were set to demolish lives today in the name of "not Islam". Here's a challenge, try to count the number of commentators on the news more worried about "backlash against Muslims" than lives to be murdered by "not really Muslims". How morally inverse is it to be worried about non existing hate crimes in the face of the most horrid crimes of hate?

LGF had a great post earlier today linking to MEMRI about why Muslims won't shake hands with Jews, But hey - Israeli Academy and health services are the ones to be singled out and boycott right? Britain had bater wake up and kick aside their far lefty moguls controlling Parliament and BBC.
at 1:37 PM No comments:

Attention to Google, Blogger.com and bloggers - you may be sued if you lie or support liers

IMHO this is a good thing - when malice and harm can be proven, when inaction in face of obvious smear and defamation is apparent - there could be a price to be paid. My only concern is that if Blogger.Com were to be sued they would conduct a witch hunt similar to the one conducted at youtube.com were the operators let antisemitism, Jihadism and many other evil to be publicized, while any criticism or even mentioning of Islam and Arabs is immediately removed.
at 12:21 PM No comments:

(would you really be surprised?)

Yousuf Al Qardawi - some of you might recognize him as one of Al-Jazeera's top preacher. He is known to be a leader of the Muslim brotherhood but he also heads some charity groups which collect donations from all across the Middle East. Those donations were recently delivered to their final destination - Hamas in the west bank. A recent gag order was removed in Israeli courts which unveils how the financial cronies of Hamas in Jerusalem and Jenin were busted. The last word of the article in Ynet merely mentions that the thread of financing terror reaches Al-Qardawi, but in my opinion - that should have been the major headline.

The following article is in Hebrew
at 11:16 AM No comments: 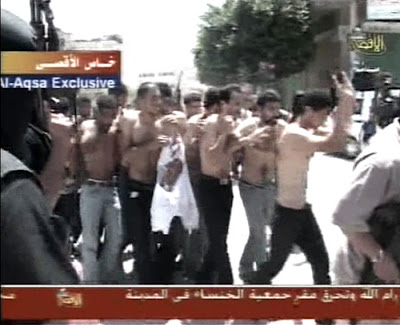 The Hamas occupation of the Gaza strip brings with it some of the most disgusting displays of Barbarism including murdering prisoners of war in the streets. Those people - who surrendered - who are their Arab brothers - who are Muslims - are paraded and murdered while they are helpless. Now let's see what do the Arabs prefer: Israel's 'occupation' or their own self inflicted barbarism.

Rumors surrounding what they intend to do with their captured brothers suggest they might build concentration camps on the ruins of the Jewish settlements.

Now let's hear the bleeding hearts from the left proclaim that Hamas won a "legitimate democratic election" (tm). These are exactly the same "democratic" moves the Nazis took when they seized control in the 1930-s.

It would appear that the abduction of the Israeli soldier last year was a move intended to cause the Israeli government to second guess itself and hesitate to take any step while Hamas takes over and bombards Israeli towns.
at 9:37 AM No comments:

About Gaza: It's called an Islamic revolution

... and it's on its way to Lebanon too thanks to Iran and Syria. I wonder if the Egyptian regime members are soiling their pants as we speak - as they were the enablers and they are next on Iran's list.
at 3:29 PM No comments:

Top Frog Stinker to be interrogated

Do you think it's a coincidence that on the same day that Jack Chirac is facing criminal investigation the French media goes on strike?
at 2:36 PM No comments:

This fake Jew holds a French passport and generally recommends Israel be dismembered and the Jews to leave. For years he's been walking with a Yarmulke while claiming he doesn't belong in any religious framework. This case is similar to the case of Azmy Bishara in the sense that he quit the parliament unexpectedly and without explanation during his tenure. I suspected back then that he was caught with bribes and was extorted to quit. I can't really guess what causes a man to do such a thing - but now that he pulled a Carter, I call for whoever can to investigate his finance. Is it possible that the Saudis bought the former head of the Jewish Agency? The agency whose only concern is to cause Jews to immigrate to Israel?

Carter, Bishara and Burg - tools (literaly) in the chess game played by Ahmedinajad.
at 7:23 PM No comments:

Amnesty International, hating Jews in the name of Human Rights 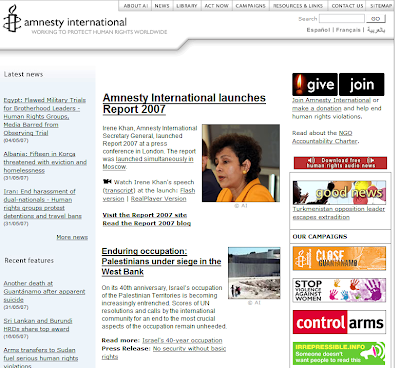 Pay attention to the languages they publish at - I count 3, including Arabic. It is very revealing as this antisemite fake human rights group mourns the Israeli victory 40 years ago.
at 1:43 PM No comments:

Insanity in the UK

There is backlash, however it is sometimes more insulting than condemning such boycotts. Take the British Ambassador in Tel Aviv (Not in the capitol - Jerusalem), he said he condemns it, but that such actions are expected were occupation exists. Although this is not the precise quote - it still reveals how far has the public opinion gone in the UK to promote such insanity.

Is it even worth mentioning that the British are not trying to boycott ANYONE ELSE? Really - there aren't any other problems in the world, no human rights violations, slavery and barbarism, no real apartheid(Saudis) - none. Insane Britz on the loose.