Time to call Evil by its name

How could you define the murderers, their families, and communities which sent them to murder Jews at a synagogue? How could such an act be labeled anything but Nazism. Today is a day we can reflect on Palestinian Muslim Arab moral values, and those who support them. I'm looking at all the British music and entertainment folks who side with these Nazis. I'm looking at the damned Swedish, Norwegian and British politicians who will stand and vote to form a Nazi state of Palestine, but will not raise their voice once in the last month to condemn the daily murderous acts Israelis face.

It's not racism to hate those who act daily to murder you. It's a fact - that Arabs in Israel mobilize and energize those who wish to murder Jews. It takes a special kind of mindset to not hate them. To think - this too shall pass. Except it hadn't passed in the last 100 years. People think that these days are amongst the worst the Jews have suffered in Israel. It is bad - and unfortunately those of us who remember know - it is AS bad, not not worse than previous waves of murderous terrorist attacks by Arabs. As the victims of this morning's massacre at a Jerusalem synagogue are laid to rest, more details emerge of the horrific killing-spree.

Back from Israel, guess where I stopped to eat? 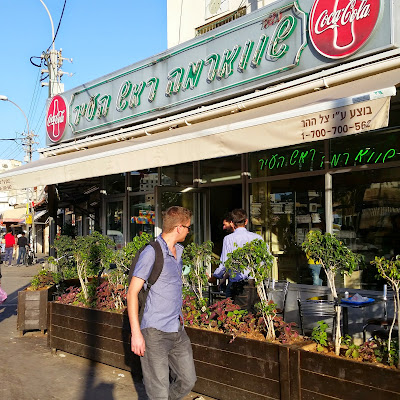 I have no time to blog these days, but I did feel an obligation to stop by and taste their stuff.
at 4:22 PM No comments: