Hamas: we like the truce let's keep it - as they fire 2 rockets onto Jewish civilians

How about blowing this dude up already? It's time for their leadership to go underground - and stay underground - or they'll be sent into the ground.


Zahar says the Strip-based group is "committed to the calm" experienced since Cast Lead; tells supporters that the quiet allows the group to rearm.

Followed by this:
Kassam rocket lands near Ashkelon

The rocket exploded in an open field near Ashkelon. No injuries or damage was reported.

Time to rock the Casbah.

From the people's cube, First Media Reports of Nativity Story:

Arabs murder US tourist in Israel, wound another, blame Israel for failed 'peace'

Why do you keep making them murder people? Shame on you... shame. Christine Logan disappeared on Saturday, when she and a Jerusalem-area friend were stabbed by assailants while hiking at an archaeological site; her friend, Susan Kaye Wilson, was hospitalized in moderate condition.

lululululu - looking forward for a video...

The five men were apparently members of Islamic Jihad and the Popular Resistance Committees.

The strike followed a relatively violent month in the south. Two weeks ago the Air Force bombed three Hamas targets in Gaza, in response to mortar shell fire at Israel.

One Israeli man, the security officer at a community belonging to Eshkol Regional Council, was injured in an attack. No injuries were reported on the Palestinian side. Made me recall this video:


Originally saw this video on Tosh.0, thought it was relevant.
at 9:38 PM No comments:

All that's needed is for the PA Arabs to curb their murderous terroristic desires for a short while. A rocket, an injured Israeli soldier and 2 dead Jihadi scum

Thanks Obama for giving the Arabs an excuse for not negotiating with Israel, which led them to the delusion that Israel will give them more land and concessions for nothing. Now that they are disappointed, and the EU and UN point fingers at Israel - they feel entitled to go on yet another murder campaign against Jews. Once again, thanks Obama.

'PA to cancel all security commitments to Israel'


Al Quds al-Arabi reports that PLO, Fatah plan to push for a unilateral abrogation of all Oslo and Road Map commitments, including fighting terror, in response to failed peace talks.

For letting the sun go down every night? Almost.

UN and EU blame Israel for breakdown of peace talks


Ban Ki-moon and Catherine Ashton criticize Netanyahu gov't for not "heeding the call of the int'l community" to extend settlement freeze; Barak calls resumption of talks an "urgent necessity."


Good for nothing Dhimmis.
at 8:13 PM No comments: 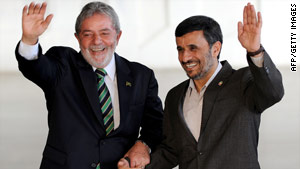 We should personally thank Brazil, Argentina, and Uruguay for letting us know what the Arabs are contemplating now. Self proclaim statehood and restart their attempts to kill Jews. It's like playing chess with an ADD violent child. He keeps losing, he keeps banging his head against the wall.

Ramallah – PNN - A statement released by the Palestinian National Liberation Movement (Fatah) said that the option of organized popular resistance was the legitimate right of the Palestinian people and that the lessons learned from last “great intifadeh” will guide people against the Israeli occupation and settlements.

Palestinians should be credited, according to the statement, with bringing the word “intifadeh” into the “the lexicon of humanity.”

The announcement comes on the heels of international recognition by Brazil and Argentina of an independent Palestinian state on the 1967 borders.


Amazingly, this is based on real documents, leaked documents; Wikileaks documents.
at 1:41 AM No comments:

Another day, another war crime against Israelis gone unnoticed, not-denounced

Qassam explodes near Ashkelon; no injuries


A Qassam rocket exploded Monday evening in an open field near Ashkelon. No injuries or damage were reported.

A siren was sounded throughout the Ashkelon Coast Regional Council followed by explosive sounds.

Two weeks ago, a false alarm stirred panic in Ashkelon, following months of calm. At first the IDF Spokesperson's Office reported that Palestinians fired a rocket toward Israel, but later it turned out to be a false alarm.

The last genuine alarm in Ashkelon was heard in mid-September, when a rocket was fired from the Gaza Strip and exploded in an industrial area in the city's south.

Every land forfeited to advance 'peace' has resulted in more terror and violence against Israeli Jews. Time to finally reach for conclusions.
at 1:14 PM No comments:

While many lose homes, many deaths, Arabs try to ignite more fires in northern Israel

Peace activists, no doubt.
(update: the title is based on this Hebrew report here, since then the publicly reported narrative has changed. There are still reports of unsolved arson cases - with the omitted assumption of nationality of the culprits)
Two nabbed on suspicion of lighting fires in North


Police Insp.-Gen. David Cohen said that the two arson suspects arrested earlier in the day are not linked to the main fire on the Carmel Mountain, at a press conference Friday evening.

Cohen said that investigators have determined that the large fire, which is raging in the Carmel, spread from a single ignition point. He added that the cause of the fire, either arson or negligence, would probably be determined by Saturday.

The police inspector-general said that there were, however, a number of suspected arson attacks in the North, but that the cause of the large Carmel fire was still unknown.

Police have said that additional fires in Kiryat Bialik and Tivon were both caused by arson.

A separate wildfire was reported Friday afternoon in a field near Route 70, in the southern Carmel mountains near Bat Shlomo (south of Haifa). Route 70 was closed to traffic in both directions.

Earlier on Friday, police found a bike, a bag, and a wig inside near a fire center in Tzur Shalom, leading them to believe that the fire was caused by an arsonist or arsonists.

Police Spokesman Micky Rosenfeld told the Post that there are 3 fire centers - Tzur Shalom, the Atlit - Tirat Hacarmel area, and the Carmel hillsides. In one, Tzur Shalom, north of Haifa, "we located suspicious items pointing to arson. As for the other two major fires, it is too early and the incidents are to large in scale to know their causes at this stage." The death toll in the fires rose to 42 on Friday, according to Army Radio.

The mostly unreliable site 'Debka' is reporting 'Israel may be facing a wave of deliberately-set fires', claiming outside orchestration.

Meanwhile, the Jerusalem Post is quotes Israeli police:
'Source of Carmel fire was burning trash, not arson'
at 1:28 PM No comments:

Hanuka, and Mount Carmel on fire

I'm back from being on the road all through this week. Chag Sameah? Not right now, let's hope this blaze ends soon.

Disaster in the North: 40 dead as fire rages in Carmel Mountains Forty people were kiled on Thursday as a huge brushfire continued to rage across the Carmel Mountains in northern Israel, killing and injuring dozens, among them prison guards and firemen.

Some 13,000 people were evacuated from their homes in the north and Israel called for international aid as the fire blazed out of control, fanned by easterly winds following a month of near record temperatures for the time of year.