Every-day there's something, just not a headline. Here's an example:

An officer and soldier from the Golani Brigade sustained light injuries Wednesday afternoon when Palestinian snipers in Gaza opened fire on them near the Kissufim border crossing, Ynet reported.

The officer and soldier were evacuated to the Soroka Medical Center in Beersheba.

I recently read in Hebrew sites that lines are forming at Aliyah offices in France, Jews who voted for Sarkozy are fleeing. I know nothing of Holande except that he is a far left person, a socialist. When the socialist came to Spain following the terror attack - much like Hollande replaces Sarkozy following the attack at Tuluz, he immediately showed his preference to Arabs point of view rather than Israel's (I'm putting this mildly).

Well, news is out that Hamas wants to BFF Holllande. 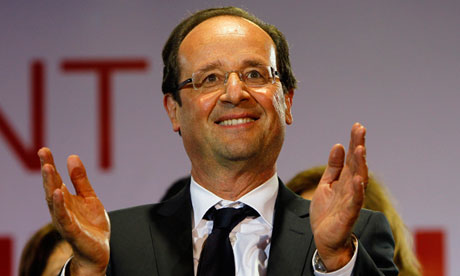 Given that Sarkozi was a strong opponent to Iran's Nukes - will the socialist reverse on that position as well?

I don't know much about this guy and his politics other than that he is a socialist. Let's hope he limits the damage he inflicts just to French economy then - and not the rest of the world's Geo-political stability.
at 10:27 PM No comments: