Just what kind of a kaka deal is Obama forcing Israel into with Arabs?

Israel is set to release 26 murderers. No word on what Israel is getting in return. No word on what's being discussed, agreed, or coerced behind closed doors in the Obama/Kerry sponsored negotiation extortion being held.

Remind me again, who was the first "world leader" Obama called on his first day in office five years ago? Isn't that grand how now he isn't restrained by electoral backlash?
at 9:35 AM No comments:

Israelis are saying that this type of act is unforgivable, and Turkey will bare the consequence and lose cooperation with rest of western world's intelligence community.


The Turkish-Israeli relationship became so poisonous early last year that the Turkish government of Prime Minister Recep Tayyip Erdogan is said to have disclosed to Iranian intelligence the identities of up to 10 Iranians who had been meeting inside Turkey with their Mossad case officers.

Knowledgeable sources describe the Turkish action as a “significant” loss of intelligence and “an effort to slap the Israelis.” The incident, disclosed here for the first time, illustrates the bitter, multi-dimensional spy wars that lie behind the current negotiations between Iran and Western nations over a deal to limit the Iranian nuclear program. A Turkish Embassy spokesman had no comment.

Top Israeli officials believe that, despite the apology, the severe strain with Erdogan continues. The Turkish intelligence chief, Hakan Fidan, is also suspect in Israel because of what are seen as friendly links with Tehran; several years ago, Israeli intelligence officers are said to have described him facetiously to CIA officials as “the MOIS station chief in Ankara,” a reference to Iran’s Ministry of Intelligence and Security. The United States continued to deal with Fidan on sensitive matters, however.

Though U.S. officials regarded exposure of the Israeli network as an unfortunate intelligence loss, they didn’t protest directly to Turkish officials. Instead, Turkish-American relations continued warming last year to the point that Erdogan was among Obama’s key confidants. This practice of separating intelligence issues from broader policymaking is said to be a long-standing U.S. approach.

show me your friends, I'll yell you who you are
at 8:19 AM No comments:

AIDS zombie Arafat was not poisioned, was poisoned, wasn't poisoned, is dead - yes, he is dead

No link, you can find contradicting reports, and the excellent Elder of Zion blog has done a great job tracking these recent reports.

I'll just ask this clear question: Why would Israel need to poison the AIDS inflicted Muppet called Arafat - when having him besieged in his ruins and occasionally issue hilarious "I'll kill you all" videos to the world - posed no threat, and actually stabilized the situation? If any dirt bag got the public humiliation and death he deserved.... 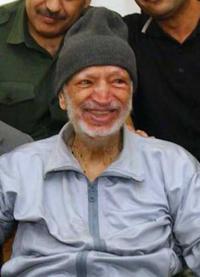 still dead, probably from AIDS
at 4:51 PM No comments: