An excellent parallel to Carter's failed policies in Iran by Hotair.com: Is this 1979?

This situation reminds me how Rush Limbaugh said he hoped Obama fails. Well, he didn't fail - he succeeded in implementing his policies, bringing down cooperating Kadaffi, friendly Mubarak - to give rise to Al-Qeada's ideological parent groups where there was some semblance of stability. Obama's success is America's failure and a danger to the world.

I followed the reports of the attacks on Israeli and American sites, and I can tell you that the YouTube clip in Arabic apparently includes some extra valuable propaganda put in specifically to incite hate: They claim it was created by an Israeli Jew, funded by Jews and all sorts of other crap meant to incite hate against Jews, Israel and Hollywood. Can one be any more transparent in his anti-Jews propaganda? 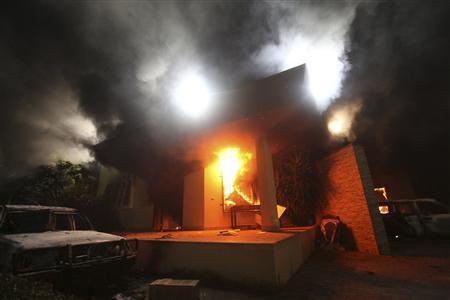 The U.S. ambassador to Libya and three other embassy staff were killed in a rocket attack on their car, a Libyan official said, as they were rushed from a consular building stormed by militants denouncing a U.S.-made film insulting the Prophet Mohammad.

This is a report of Foxnews: Filmmaker Sam Bacile in hiding after anti-Muslim film sparks violence in which American diplomat was killed


Bacile, a California real estate developer who identifies himself as an Israeli Jew, said he believes the movie will help his native land by exposing Islam's flaws to the world. "Islam is a cancer, period," he said repeatedly, his solemn voice thickly accented. The two-hour movie, "Innocence of Muslims," cost $5 million to make and was financed with the help of more than 100 Jewish donors, said Bacile, who wrote and directed it.

Like I mentioned above, I don't believe a word of it. Who is this guy? Anyone heard of him? What is this report of "100 Jewish donors"?! This smells of "elder of ziyon" type conspiracy.
at 9:03 AM